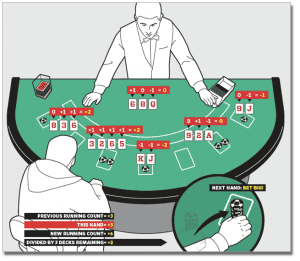 Blackjack and card counting are synonymous thanks to Hollywood depictions in films like Rain Man and 21. But while the characters in movies achieve success with a mixture of teamwork and abnormal brain functions, the bulk of card-counting players do so through patience, persistence, and a willingness to play endless hands of blackjack.

Sign up to play online blackjack for real money at All Slots Casino, Royal Vegas Casino or Guts Casino.

This article will teach you the basics of how to count cards in 21, and we’ll also discuss the history and advantages of the art. While counting cards greatly improves your chances of success, please keep in mind that it’s not magic; just because you can count cards doesn’t give you the ability to accurately predict which card is going to be turned up next. As long as you keep realistic expectations, though, this skill should serve as a major weapon in your gambling arsenal.

What is card counting?

While card counting is primarily used in blackjack, the strategy also exists in games such as spades and contract bridge. The objective is to keep a running count of all cards played, thus allowing card counters (also known as “advantage players”) to make larger bets when the count is in their favour and minimize wagers when the count is unfavourable.

The basic premise of blackjack card counting assumes that high cards—especially tens and aces—are a benefit to the player, while lower cards are an advantage to the dealer. When the count indicates a high presence of aces and tens in the deck, the player will have a greater chance of hitting a blackjack or winning when doubling.

According to traditional casino rules, the dealer must hit when holding a total of 16 or less. This is where smaller cards act in their favour, as drawing a two, three, or four will put them closer to 21 without busting. Drawing a ten, meanwhile, results in a dealer bust and a win for the player. 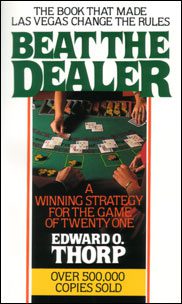 More advances systems were developed in the 1970s and 1980s thanks to advances in computing power and the efforts of casinos to circumvent older systems. The Big Player Team tactic also appeared in the 1970s, a team-based method that has allowed groups—most notably the MIT Blackjack Team—to walk away with millions of dollars at the casino.

The most basic of counting methods, High-Low is known as a level-one system because the count of the player will never increase or decrease more than a single digit at one time. This system works best after a deck has been shuffled, although the presence of automatic shufflers in many casinos—and well as multiple decks—makes it more difficult for the player to count deep into the deck.

The player begins with a mental count of zero and then adjusts this number as cards are played on the table. The count is reduced -1 if an ace or face card is played, while the two through six cards increase the count by +1. Cards with a value of 7, 8, or 9 do not adjust the count.

When it’s time to wager, the player mentally checks their count and acts accordingly. A flat bet is the best strategy when the count is below +1, while a +2 or +3 is the cue to double your wager. A player with a +4 or +5 count should triple their bet, and they should quadruple their wager with a +6 or +7. Finally, if the count is +8 or greater, the player would be wise to quintuple their bet.

The Omega II in an example of a level-two counting system, as the count can increase by a maximum of two digits at any given time. The objective of the system is to bet less with a low count and wager more with a high count. The Omega II became popular in the early years of the new millennium thanks to a book by Bryce Carlson entitled Blackjack for Blood.

The 2, 3, and 7 cards adjust the count by +1, while the 4 through 6 cards result in a +2 adjustment. The 8 card has a zero value, while the 9 card adjusts by -1. Tens and face cards are worth -2, and the ace has a zero value. For optimum success, a player should keep track of aces separately.

In order to combat card counting in blackjack, casinos have taken a number of precautions. Here are some of the more notable efforts:

Knowing how to count cards in 21 can greatly reduce the house edge through methods such as Wonging, High-Low, Zen Count, and Wong Halves. If you’re new to the world of blackjack and card counting, I advise you to start with the most basic system possible. Once you’ve practised for hours upon end and obtained a level of mastery, you’ll be able to move to a new system and begin again.

Grab a $1600 welcome bonus at All Slots Casino and use it to play games like European Blackjack, Double Exposure, Atlantic City Blackjack, Hi-Lo 13 and Multi-Hand Gold Blackjack.