Blackjack is one of the most popular card games within Australia. While the amount of different variations of the game is abundant, it is important to try and play with the more traditional rules when following basic blackjack strategy.

For instance, Melbourne’s Crown Casino has recently introduced the game of Blackjack Plus, where if the dealer draws to 22, a stand-off/tie is implemented, rather than a dealer bust. If the player draws to 22 however, he/she busts. Traditionally, a blackjack hand (Ace and a Ten/face card) pays 3:2, but many variants hold a different pay out of 6:5, or even 1:1. Both of the above rules severely hinder a player’s odds, so it is best to steer clear of such titles.

Following basic strategy is the best way to maximise our chances of coming out ahead. Like all casino games, there is always an edge in favour of the house, but with some savvy percentage plays, we can firmly reduce the casino’s advantage. With a simple goal to get as close to 21 as possible without exceeding it, and beating the dealer’s hand, smart decision-making goes a long way. Some of the greatest minds to play blackjack developed the basic strategy chart, which explains what moves should be made in every case scenario, to maximise your chance of success. Having a copy of the chart itself, or the worded explanation of the chart is definitely acceptable (just make sure you don’t hold up play, if playing with others). 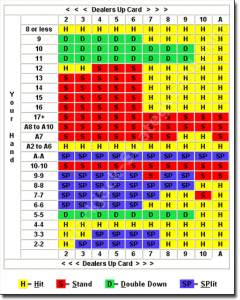 If you’re not familiar with the basic strategy chart, it is a detailed table which pits every possible player hand against the dealer’s face-up card, and suggests what should be done with the player hand, depending on what the dealer has. In the following sections, we will transcribe the chart in plain English, so it is easily understandable. It applies to games with four-eight decks, where the dealer stands on all 17s, and checks for blackjack before players play their hands. When doubling is suggested below, only do so if allowed, otherwise hit.

A hard hand is any hand without an Ace, or with an Ace which is forced to count as one point. For instance, a Ten/Five/Ace is classified as a hard-16, because if dealt in that order, the Ace can only count a one point (otherwise, at 11 points, it would bust the hand). The guidelines of the basic strategy chart advise players to stand on any hard hand worth 17 or more, because they are in a strong position, and chances of a bust are significantly high if drawing another card. Player hard hands totalling between 12 and 16 can also be referred to as stiff hands. Here, the player can bust with one additional card, but is more unlikely than likely to have a strong enough hand to defeat the dealer.

Any hand that contains an Ace, where the Ace can count as either one or 11 points, is called a soft hand. For example, a hand with an Ace and a Five can either be scored at six points, or 16. In this particular case, basic strategy and common sense says you should always hit no matter what, because you cannot bust and your hand is probably not strong enough to win.

When you have been dealt two cards of the same rank (for example, two Aces), the ‘split’ option (in most games) becomes available. The power of the Ace should be ingrained in a player’s mind, and all should know to always split a pair of Aces, because it increases their chances of drawing blackjack, and they will be left with a hard-12 (a stiff hand) if they don’t. Once two Aces are split, the two new hands are each given another card. If a Ten/face-card is drawn to either hand, you have blackjack.

Some games have rules regarding splitting Aces, where you can only receive one additional card for each Ace, while a rule which is even rarer (but does exist) states you can’t split any cards at all. Try avoid these games. Rules regarding re-splitting cards (if cards have been split, and then another card of the same rank is again dealt to a hand) also change from game to game.

If the dealer shows an Ace as his/her up-card, players will usually be offered insurance: if you take up this offer, you put forward half your original bet to ‘insure’ against a dealer blackjack. If the dealer has blackjack, you win the insurance side-bet (2:1 odds), but you will lose your original bet, thus breaking even. If the dealer doesn’t have blackjack, you lose the insurance bet and play out the rest of your hand. We advise never to bother with insurance, as the odds are not in favour of the player.

This side-bet is available in most games, and allows us to place a wager (in additional to our regular blackjack bet) on cards of the same rank (two Kings, two Fours, etc.) being dealt as the first two cards. While it is a popular wager and provides some added entertainment value, the house edge is around six per cent, so the perfect pairs option is not profitable in the long run.